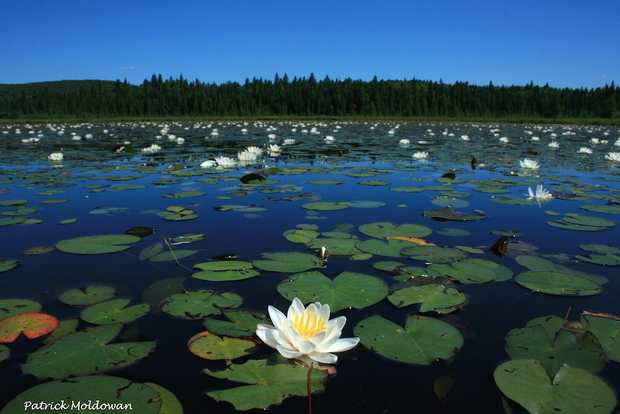 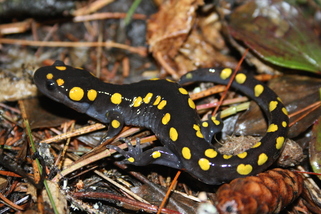 Population biology and sensitivity to environmental change in an amphibian community (Ph.D. projects)
Amphibians are our contemporary "canaries in the coal mine", acting as sentinels of environmental health. Salamanders, in particular, can attain very high abundances in eastern North America, which makes them important players in the function and well-being of forest and wetland ecosystems. Cumulating from nearly two decades of prior monitoring, formal study began in 2008 to addressing the ecology, life history and sensitivity to environmental change of Ambystoma salamanders in Algonquin Park. Our research addresses many aspects of amphibian biology and conservation, and how the environment influences and is influenced by these amazing animals. Supervision by Njal Rollinson, in collaboration with Glenn Tattersall. 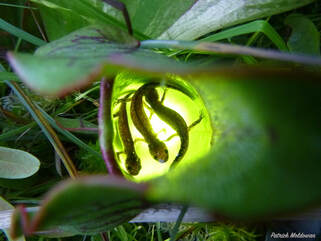 Nature's pitfall trap: Salamanders as rich prey for carnivorous plants in a nutrient-poor bog ecosystem (Ongoing side-projects)
Carnivorous plants capture our imagination, and more! Despite seeming so exotic, Northern Pitcher Plants (Sarracenia purpurea purpurea) are widespread in nutrient-poor bogs of North America. These plants acquire essential nutrients by catching prey, mostly insects, in specialized leaves akin to an open pit stomach. You can imagine our surprise on discovering that plants were trapping unusual dinner fare: Salamanders! This plant-eat-animal phenomenon begs many questions: Why are salamanders becoming trapped? How do plants use such large nutrient doses? Although cryptic, salamanders can be very abundant making them important in food webs, forest and freshwater nutrient cycling, and as sentinels of environmental health. These unexpected observations teach us that we still have a lot to learn, even about common organisms in our own backyard. Supervision by Njal Rollinson, in collaboration with Amanda Semenuk and Alex Smith. 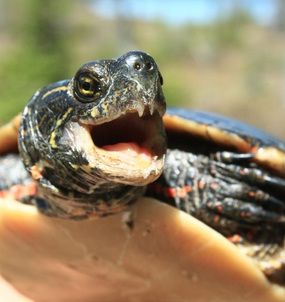 Sexual weaponry and reproductive strategies of the Painted Turtle (M.Sc. Project + ongoing side-projects)
The reproductive strategy of Painted Turtles (Chrysemys picta) has long been known as a combination of male courtship and female mate choice. However, in situ field observations and multiple lines of evidence from long-term study of Painted Turtles in Algonquin Park demonstrate that males have a suite of complex traits and behaviours that underpin a far more complex, tactic-switching mating system. Armed with "teeth" (tomiodonts) and spiky shells, male Painted Turtles are not the gentle suitors we thought we knew. Novel findings of the world's most well-studied freshwater turtle show a surprising mix of sex and weaponry [M.Sc. thesis]. Ongoing collaboration with Jacqueline Litzgus, Ron Brooks and Njal Rollinson. 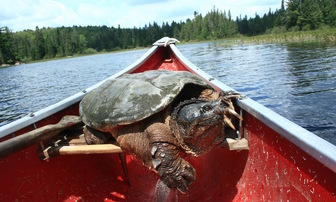 Freshwater turtle ecology, life history, and conservation (ongoing projects)
The long-term turtle project based out of the AWRS began in 1972 with the goal of monitoring life-history and responses to environmental variables in long-lived species occurring in relatively undisturbed ecosystems. Many of the turtles captured as adults in the first years of study are still alive and reproducing annually, and may individuals may be 100+ years.  Snapping Turtles and Painted Turtles are widespread in North America. Despite public perceptions of commonness these species are subject to numerous threats and are consequently of conservation concern. This long-term project  has provided information on the biology of long-lived species that has been imperative for their conservation. The AWRS turtle project is unique dataset spanning over 45 years and tens of thousands of captures of individuals shedding light on their responses to climate, habitat, and demographic pressures. Project led by Jacqueline Litzgus, Njal Rollinson and Ron Brooks. 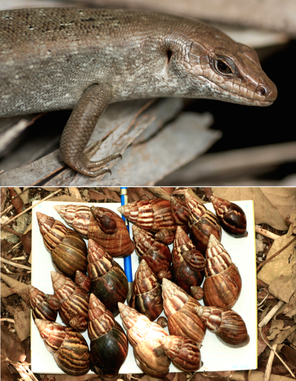 Population monitoring and putative biocontrol of the invasive Giant African Land Snail (Achatina spp.) on Ile aux Aigrettes, Mauritius (P.G.Diploma Project)
The objective of this project was to evaluate the status of the invasive Giant African Land Snail (Achatina spp.) population on Ile aux Aigrettes (IAA), Mauritius, following the reintroduction and  medium-term establishment of an endemic predator, the Telfair’s Skink (Leiolopisma telfairii). This research re-examined a putative causal link between the reintroduction of Telfair’s Skink and observed population declines (biocontrol) of Achatina on IAA (Copsey et al. 2011). I evaluated how the  population of Achatina (2015) compared to pre- (2000) and short-term post-predator introduction (2008, 2009) on IAA. I also examined habitat occupancy and the influence of climatic conditions on Achatina population size.
​ 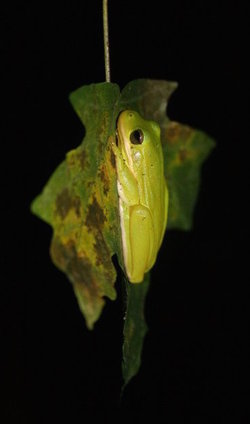 Influence of genome size on call complexity of anurans
(B.Sc. Honours Project)
Cell size is strongly positively correlated with genome size (amount of haploid DNA in a genome) in amphibians. Further, cell size exhibits a negative relationship with complexity of the anuran brain and central nervous system. Considering this genome size-cell size-neural complexity relationship, it has been hypothesized that differences in DNA content may drive the differential call complexity observed between anuran taxa. Do anurans with large genomes exhibit low call complexity? Dominant frequency and bandwidth demonstrated a significant negative correlation with call complexity. These results provided limited support for the proposed hypothesis and suggested that the cell size-neural complexity relationship is not a unifying mechanism controlling call complexity. Alternative mechanisms, such as environmental and sexual selection, reproductive character displacement, genetic drift, and predator-prey interactions, are likely to have a strong influence on the evolution of anuran call structure and complexity. Supervision by Professors T. Ryan Gregory and Thomas Nudds with assistance from Van La.
Powered by